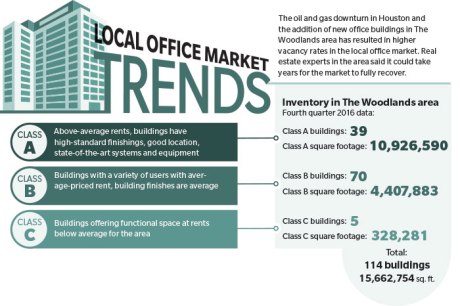 A high availability of office space in The Woodlands area due to the oil and gas downturn and new developments being completed has resulted in a tenant’s market.

At the end of 2016, there was about 1.8 million square feet of vacant space in The Woodlands area on the market and a 12 percent vacancy rate, according to data from Colliers International.

“The net reality is, there is a significant amount of available space in the market right now,” said Jeff Beard, president of Woodlands-based J. Beard Real Estate Co. “If we were in the Galleria, downtown or near Westchase, that would mean nothing because the market is so large. But [in The Woodlands] it means we have a high availability rate.”

The rise in availability can be attributed to a flattening in demand for new office space and a combination of new buildings coming online, said Paul Layne, executive vice president for The Woodlands Development Company.

“In a slower economy—like Houston has been in due to the drop in oil prices—many companies have chosen to renew in their location rather than branch out and expand,” he said.

The oil and gas downturn, which began in late 2014, resulted in the downsizing of office space over the past two years as companies laid off employees; nearly 80,000 oil-related jobs have been lost in Houston since the downturn began.

“The oil and energy companies take up the majority of the office space, so when you have a contraction like we’ve had with oil prices, it’s a natural reaction to have the oil companies trim down,” said OJ Bobek, director of commercial real estate for Keller Williams in The Woodlands.

Before the oil and gas downturn began, oil at $100 a barrel was a major driver for a variety of industries in the Greater Houston area, including medical and commercial, said Ross Foldetta, founder and principal of Foldetta Commercial, a commercial real estate firm in The Woodlands.

“Whether we like it or not, the Greater Houston area is still very driven by the oil and gas economy,” he said. “However, developers had a practical level of reasoning to think opportunistically when new office product was originally planned and started.”

The addition of new office buildings over the past several years in Town Center, Hughes Landing and Lakeside has also affected the amount of square footage on the market, Beard said.

“Because of the new construction, I think it skews the numbers a little so that vacancy is higher than some other submarkets [in the Houston area],” he said. “But rental rates are some of the highest in the city, and that’s an indication it’s a desired market.”

There are three newly constructed speculative buildings on the periphery of The Woodlands with low occupancy numbers, Foldetta said.

“That’s a considerable amount of our office vacancy,” he said. “I think you’ll see these buildings will lag behind what [The Woodlands and Springwoods Village] experience for successfully landing major companies.”

Subleasing has also become more prevalent during the downturn as companies find themselves no longer in need of as much or any office space, Bobek said.

“Say I’m an oil company and I can’t use my space anymore, so I give it to a broker,” he said. “Now I bring that space to the marketplace, so we not only have new space, but sublease space. The current tenant is still paying on that space, so his incentive is to reduce his rent to have a more attractive tenant to take his space.”

Although there is a large availability of office space on the market in The Woodlands, the area is still faring better than other parts of Houston, real estate brokers said.

“It’s a more consistent, high-quality area to [work] and live in, and because of those things, historically we have stayed substantially better than Houston overall,” Layne said.

In terms of new office spaces, landlords have to get creative during a downturn if they want to lease properties, Bobek said.

“They have to offer tenant improvements, maybe free rent, or drop some of their rates to get more competitive with subleases,” he said.

Tenant incentives are tied to supply and demand, which means incentives typically increase when there is more supply than demand, Layne said.

“It’s what’s referred to as a tenant’s market,” Beard said.

Newly opened office spaces in The Woodlands also have new amenities not seen before to cater to new tenants, such as 3 Hughes Landing, which is in available for new tenants.

The space offers a number of amenities for tenants not typically found in the workplace, such as a boat dock, a fitness center and showers, a conference center and a lounge area. In addition, the parking garage will feature bicycle and kayak storage so tenants can bike, jog or row to work, Layne said.

“That transportation amenity [Springwoods Village] has as an influence factor has clearly shown to be relevant,” Foldetta said. “They’re effectively at the hub of the Grand Parkway, Hardy Toll Road and I-45. They have transportation connectors others can’t replicate.”

New office development is still taking place on the west side of The Woodlands as well. Construction began in February on The Offices at Dry Creek, an office condominium project located a quarter-mile from the May Valley neighborhood.

Although it may take three or four years for the office market to fully recover from the downturn, Bobek said the demand in the coming months will most likely be for smaller office spaces in The Woodlands area.

Foldetta said the non-Class A office market will probably see the most traction in the next several months.

However, it is unclear how long it will take ultimately to absorb the vacancies in the local market, he said.

“That’s one of the key questions,” he said.

Layne said he is optimistic about 2017 and the recovery for businesses in Houston and The Woodlands that will create additional growth and stability.

“I think we’ll see a strong uptick in leasing as companies believe Houston is coming out of the down cycle,” he said. “We’ll begin to grow again, thereby [causing companies to take] more space and [be] more optimistic to move to higher-quality office buildings.”

Beard said he expects to see a firming of rental rates this year along with more leasing activity, which means more absorption of empty space.

“I think we’ve maybe bottomed out at peak availability, and I see those things improving,” he said. “Our activity in the first two months [of 2017] has been extraordinary.”

The current market state should place companies in a position to pick and choose what they want, Bobek said.

“Everyone was shell-shocked in the past two years,” he said. “The bleeding may be over, but the healing isn’t.”